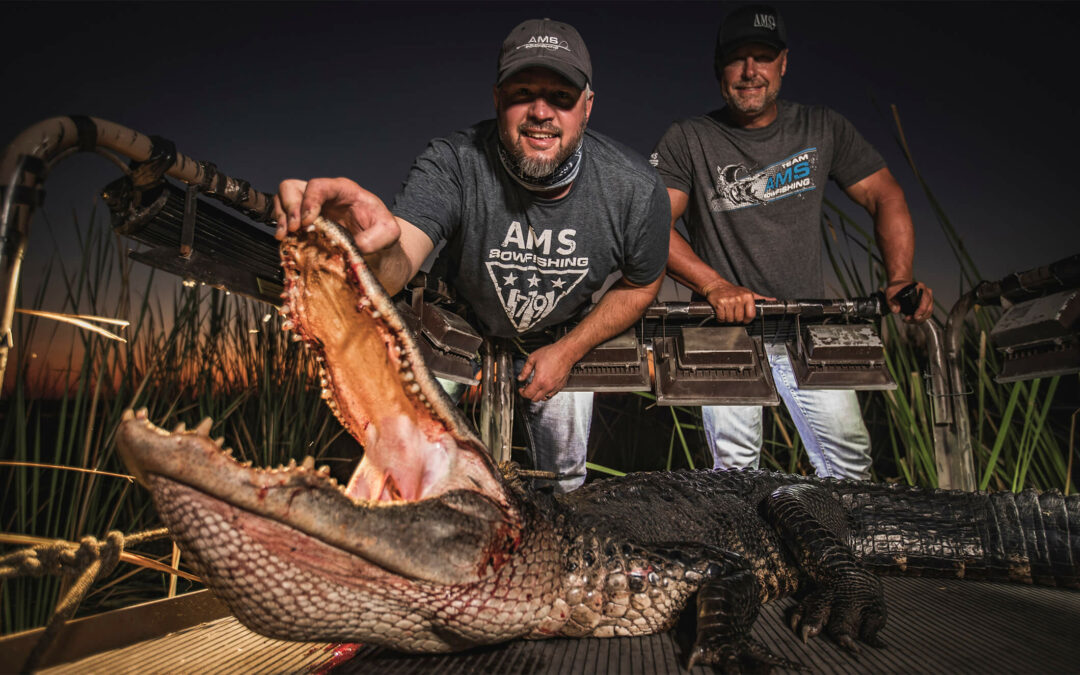 Harvesting a gator during the day has always been on my bucket list. At a recent trade show my buddy, Billy Lawson, showed me a video of an alligator, in broad daylight, swimming through lily pads, parting them as
it made a direct path toward the boat he was in. “I’m in!”, I immediately exclaimed. Several months later, after careful planning, I was on a plane to Florida to meet up with Billy for an adventure to harvest a Florida alligator during the day with my bowfishing gear.

After a smooth flight, I met up with Billy and we headed out to one of the many flat calm Florida swamps. When we arrived at the dock, I was introduced to some of the guides from Orlando Gator Hunts. Without much hesitation and talk, we started loading the airboat with our AMS gear.

The plan for the day was to take the airboat out, tuck it into some high grass and start calling gators by using a Bluetooth speaker which played the sounds of young alligators. The call would draw in females wanting to protect their young or male alligators coming to have a meal. This was the tactic used for daylight alligator hunting. After several attempts with no response, I started to wonder if there was any truth to this method.

After moving around several times and finding our way into jungle-like vines and shrubs, the call began to play again. All of the sudden, I heard a splash and turned back to look at the guide. The guide pointed to the left of the airboat as we watched the lily pads bobbing and something weaving through the swamp. The alligator appeared to be about 20 yards away from the airboat but we never got a clear visual due to the thickness of the vegetation.

As we continued our calling, I noticed the beautiful Florida sun sinking below the horizon. As day turned into night, we had to switch our tactics from calling with the speaker. Instead, we used a spotlight to shine across the water to look for the glow of red alligator eyes in the swamp. Over the course of the night, we did see several alligators, but none were large enough to harvest.

The following afternoon, we again met up with the guides. As we left the dock, I took in the beautiful scenery, noticing the Spanish moss-covered cypress trees that shadowed the glistening water. We soon found our way to a new spot and resumed playing the alligator call. After a few distant sightings, we noticed a “V” shaped wake heading our way. This thing was moving and coming in hot! As a hunter, you know when things are going to happen when you have such a committed target.

“Don’t screw this up!”, I told myself. As it drew closer, I could see its entire body and the scoots on his back running the length of his tail. At 15 yards, I could see its eyes and nose poking above the water. I knew now was the time to make a move and turned slightly to my left while raising my bow and drawing back. At about 7 yards out, the gator turned, looked our direction and disappeared under the water. I released and watched as my arrow flew through the air and into the water, finally making contact with the gator. The water exploded as the line of my Big Game Retriever reel zipped out and we all let out shouts of excitement!

Instantly, Billy grabbed another bow so he could get another arrow into the gator for better control. He released an arrow and the water exploded again! We now had two arrows in the gator! After several minutes of spinning, rolling, thrashing and snapping at the side of the boat, the gator began to tire. A few more short bursts and we had the gator alongside the airboat. The alligator was vertical with his head out of the water and his tail hanging straight down. It’s Florida law that gators be dispatched with a bang stick, a specialized firearm used in direct contact with the target, before bringing them in the boat. With a quick “POP” the gator went limp.

We raised the alligator’s head out of the water and taped his mouth shut. It took two of us to pull him onto the deck of the airboat. This was the first time I was able to see exactly how big my trophy was, just short of 10 feet! I rubbed my hands across the gator’s back and over his scoots, all the way down his tail. High fives, fist bumps and hoots and hollers followed.

Before heading back, we dropped the gator off at the meat processor, so we could have some gator tail in Wisconsin when I got back. Needless to say, I was on an adrenaline rush the rest of the night. I kept replaying the excitement of our experience in my head and could barely sleep.

As I left the beautiful state of Florida to return home, I knew that the memories of this gator hunt would forever be etched in my mind. I can still smell the warm, humid Florida air and feel the light breeze across the water. I will always remember the explosion in the water after my shot, the rolling, twisting and snapping alongside the boat and the feeling of finally pulling in my trophy. For me, this is what bowfishing is all about.