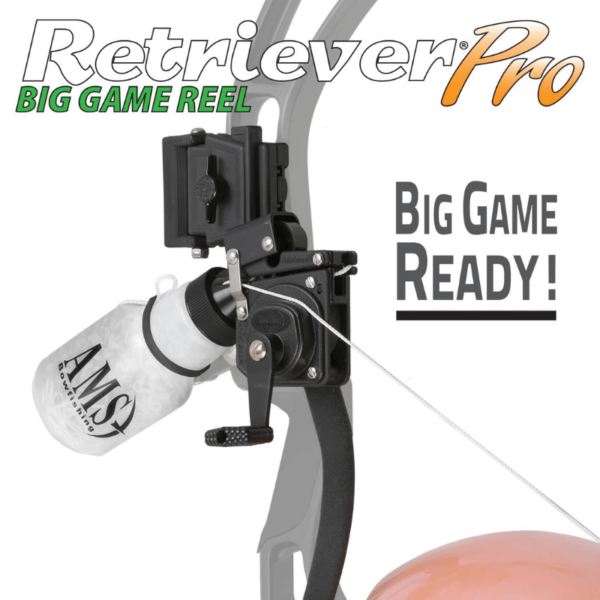 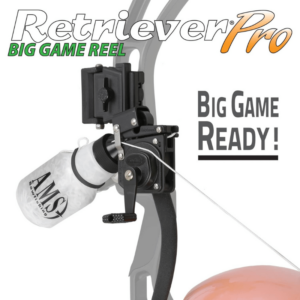 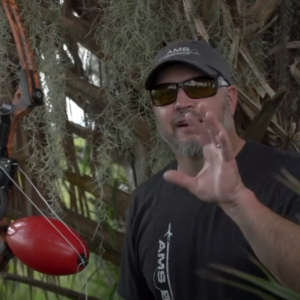 We’ve gone overboard, so you don’t have to! The Retriever® Pro BIG GAME reel can handle all big game, including alligator, gator gar, shark and stingray.

This reel allows the end of the line to pull free from the reel while being tied off to a float. (sold separately)

If you shoot and miss, retrieve your arrow. If you connect, the prey will take the float.

Lessons from the Field

While alligator are the most sought after big game, crocodile, shark, alligator gar and stingray have successfully been retrieved using AMS Big Game gear. When playing out an alligator or other large game, you must be extremely careful of several things. First and most importantly, make sure your AMS Big Game Retriever® reel is rigged correctly and that the line going to the float is snug. The float line exits the reel through the slot in the side plate of the reel, while the portion of line tied to the arrow remains within the operating mechanism of the reel for retrieval on missed shots. The float line must be pulled snuggly over the gear cover assembly, not under it, or line will snag on the handle. When properly rigged, tension on the float line can be controlled by using the small loop of line that is pulled from a slit in the bottle. In turn, this loop is controlled by the black rubber collar on the bottle neck and can be adjusted by pulling one side of the loop or the other on the outside of the bottle neck. Ensure that the loop of line remains tucked under the rubber collar. Tangles can result and trophies lost if the loop gets back inside the bottle and interferes with the nicely stacked line.

After the gator or other big game has been hit, it will pull all the line from your reel, including the short float line and tug the float from your bow. Hold your bow tightly until the float is taken. In the case of alligator or crocodiles, you may need to help remove some line from your reel as they often sink to the bottom after being hit. Sometimes they’ll go into an instant roll. In the case of an 8 foot long, 200 pound lemon shark, the line from your reel will be gone in a split second and you won’t even feel the float being pulled from the bow and the float will disappear for a few seconds at a time from the sheer speed of the fish. Or, if you don’t have a tight grip on your bow when you hit a huge Southern ray, it may be yanked out of your hand in an instant and sink to the bottom of Chesapeake Bay. If you’re really lucky, you’ll recover your bow when the dust settles and even luckier, recover the ray. True stories.

Be prepared to quickly re-rig in the field or have another Big Game set-up ready for a second shot. We recommend shooting a second well-placed, close-range arrow as soon as possible. By having two arrows secured in the hide with two lines attached, the chance of successfully boating it more than doubles. The odds of the first arrow pulling or ripping out decrease and you can confidently increase the pressure on the lines so it tires out sooner with the goal of safely bringing your trophy into the boat.

Follow the float and gently pull up on the lines. Be extremely careful when handling these lines. Wounded game can roll, dive, bolt or change directions in an instant. Slowly pull on the lines hand-over-hand and leave the slack line in the water to reduce the chance of entangling with it. Never wrap the line around your hand or fingers and don’t pile the line at your feet. A loop of line around a hand or finger with big game on the other end could quickly result in an emergency trip to the hospital. For safety’s sake, a final shot with a broad head or the use of a bang stick or firearm is required before bringing these dangerous trophies into the boat.