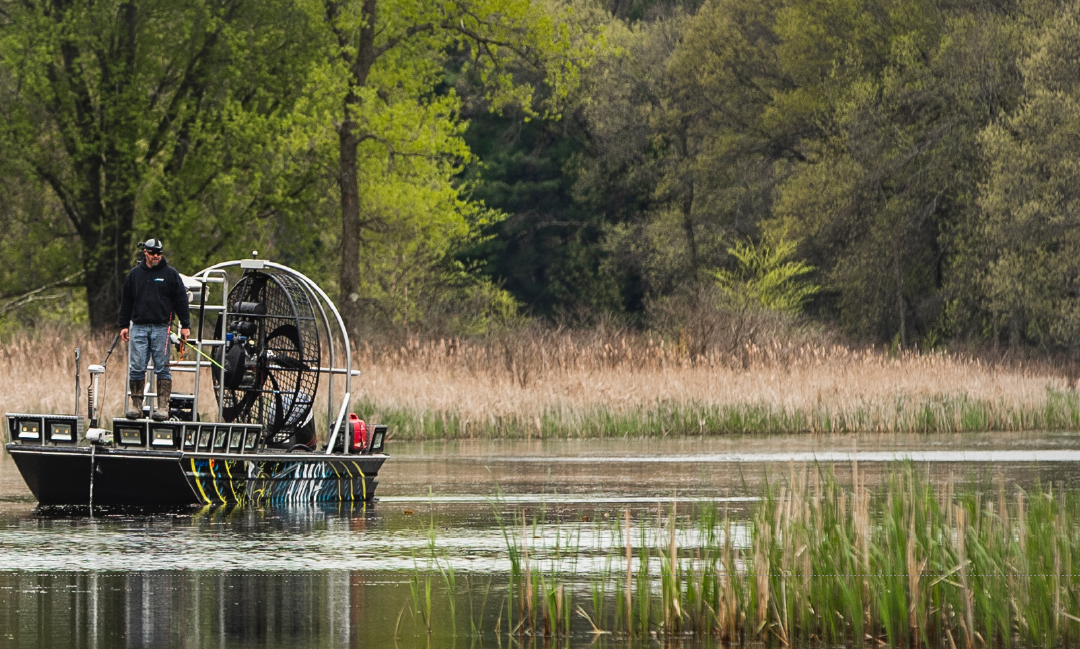 When most people say the word “buffalo”, they think of the broad, muscular creatures with shaggy coats that traveled in herds throughout the great plains. Oftentimes, this word sparks a picture of Native Americans and cowboys riding along these majestic creatures, hunting them for their meat and hides. However, in bowfishing, when I say “buffalo” it has an entirely different meaning.

Buffalo, or “buffs,” are the largest species of the sucker fish family and can be found in freshwater lakes of the United States. These sometimes massive fish are not popular game fish due to their difficulty to catch by hook and line. When regulations changed to allow buffalo to be taken with bowfishing gear, it became a wildly popular bowfishing target. This is where my story begins.

Every spring when the lakes of Wisconsin start warming, buffs begin working their way from the deepest parts of the lake to shallower waters to spawn. A few years back, I was making several trips out to the lakes each week to check water levels, water temperatures and fish movements. Each week that passed made me more excited for the following week in hopes it would be the start of the spawning season.

One afternoon, I went out with my friend Kelly and brother Korey to scout for fish activity. When we arrived, the lake was alive. Although water clarity was poor, the fish were making large wakes and ripples everywhere. We grabbed our AMS Bowfishing® gear and hit the water. It wasn’t long before a buff showed itself for a few seconds. Instinctively, I swung my bow around, drew and quickly released an arrow. The water exploded as my arrow drove into the side of the fish. The line from my Retriever® reel started spooling out as the fish continued to fight against the arrow. The fish surfaced and I saw the sheer magnitude of its size. Excitedly, I shouted for assistance, as one of them was already releasing another arrow as a backup shot into the massive buff. After working the fish in, we lifted it into the boat. I was amazed at the size of it! I got it on the scale and was shocked that it read 52 pounds!

All I thought about was that monster buff. It was no surprise that I was on the water that following weekend with my friend Allan and his wife Amy. We loaded up the AMS boat and headed out in the late evening to wait for darkness to set in. Even before turning on the generator and lights, I stood on the shooting platform and saw a fish stirring up the bottom and making small ripples in the water. I grabbed my AMS bow, nocked an arrow and patiently waited as the fish came toward me. When it was about 5 yards away, I hit the pressure switch on my Spec Ops light. Instantly 1,000 lumens of light penetrated the water from the riser of my bow. I could see large scales and a bit of its back fin as the fish slowly swam through the murky water. I drew my bow and let an arrow fly. The line from my reel hissed through the water. When the arrow made contact with the fish, the water exploded. The fish actually turned the boat as it fought against me.

As I worked it toward the boat, Allan quickly put another shot into the fish. After a bit more of a fight, we gaffed the buff and hoisted it into the boat. I instantly knew that this was bigger than the 52 pound fish I had taken the week prior. It was a true monster! I was awestruck as I analyzed the size and girth of the fish. Then, it dawned on me that I had forgotten the digital scale. The fishing was too good to leave so we continued to bowfish late into the night and planned to weigh it in the morning.

The next morning, I headed to the AMS Bowfishing shop to clean the boat and weigh my trophy. On the way, I picked up my dad so he could be a part of the excitement. Once we arrived at the shop, I grabbed the digital scale. I put the fish on the scale and watched the numbers climb. I could not believe what I was seeing. The scale flickered between 68 and 69 pounds. A new state record!

Time was of the essence and I needed to get the fish officially weighed before it lost any more weight. Knowing this buffalo could be a new Wisconsin state record, I quickly called a game warden and was on my way to have my buff weighed and certified. Once we got to the certification station, I placed my fish on the scale as a small crowd of people gathered around. After a few minutes and close inspection by the game warden, he finally announced the weight. “70.5 pounds!” I did it!I broke the state record!

Since harvesting my state record buff, the record has been broken three more times. It now stands at a staggering 94.3 pounds. I thought my obsession for giant buff was over but I can’t wait to get back out there in search of a 100 pound buff.